The Paper of the Month – December

Title: Unclear symptom onset ICH: where & what to look for in images? 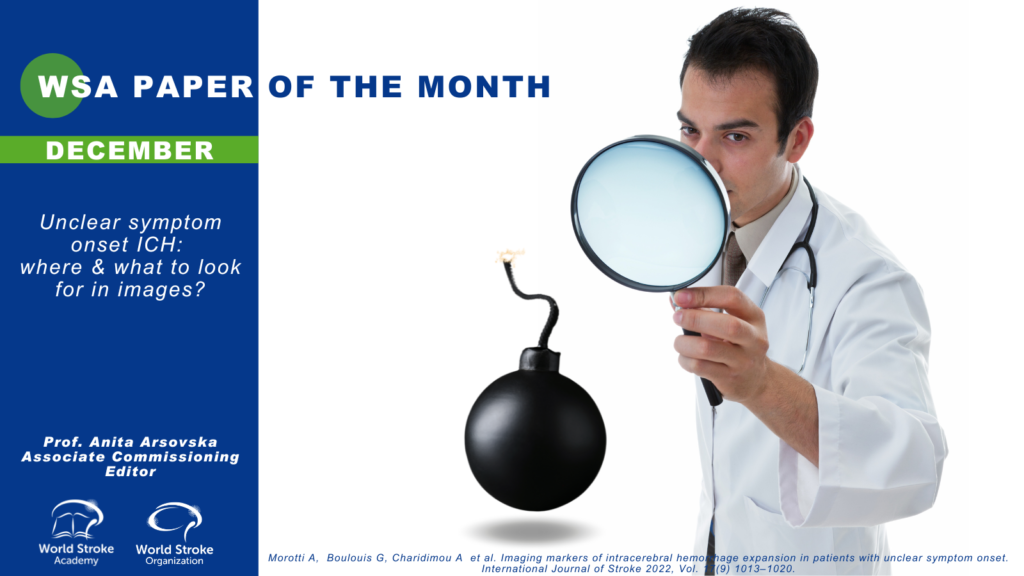 Title: Unclear symptom onset ICH: where & what to look for in images?

This article is a commentary on the following

This month we are highlighting the paper “Imaging markers of intracerebral hemorrhage expansion in patients with unclear symptom onset”. The authors made a retrospective analysis of 178 patients with primary spontaneous intracerebral haemorrhage (ICH) to test the association between non-contrast computed tomography (NCCT) markers and hematoma expansion (HE), since this is associated with poor outcome in ICH with unclear symptom onset (USO). Baseline NCCT was analyzed for presence of intrahematoma hypodensities, heterogeneous density, blend sign, and irregular shape. All these markers were independently associated with a higher risk of HE, after adjustment for confounders (ICH volume, anticoagulation, and time from last seen well to NCCT). Hypodensities had the highest sensitivity for HE (0.69), and the blend sign was the most specific marker (0.90). All NCCT markers were more frequent in early presenters and more sensitive in this population as well (hypodensities had 0.77 sensitivity). The authors conclude that NCCT features are associated with HE in ICH patients despite USO and regardless of delay since last known well. These findings suggest the possibility to include USO patients at high risk of HE in future trials targeting active bleeding in ICH.

Time from onset is a key inclusion criterion in ICH randomized trials. However around one in three patients with ICH have an USO and predictors of HE are still understudied in this population

3. What were the key findings?

4. Why is it important? Or how might these results impact clinical practice?

NCCT is a widely available and fast imaging modality that might help the stratification of HE risk in different settings. Our findings might also inform HE risk stratification in future trials

5. What surprised you most?

Time is brain also in patients with an unclear onset: HE and NCCT features were more common within 6 h from time last seen well and sensitivity for HE was higher in this time range.

6. What’s next for this research?

We have showed an association between NCCT features and HE. We will investigate the added value of NCCT markers to currently available prediction tools.

Time is brain in ICH and the therapeutic window for HE is narrow. ICH needs to be treated as a time-sensitive medical emergency.

Education platform of the WSO @WorldStrokeOrg

This website uses cookies to improve your experience while you navigate through the website. Out of these, the cookies that are categorized as necessary are stored on your browser as they are essential for the working of basic functionalities of the website. We also use third-party cookies that help us analyze and understand how you use this website. These cookies will be stored in your browser only with your consent. You also have the option to opt-out of these cookies. But opting out of some of these cookies may affect your browsing experience.
Necessary Always Enabled
Necessary cookies are absolutely essential for the website to function properly. These cookies ensure basic functionalities and security features of the website, anonymously.
Functional
Functional cookies help to perform certain functionalities like sharing the content of the website on social media platforms, collect feedbacks, and other third-party features.
Performance
Performance cookies are used to understand and analyze the key performance indexes of the website which helps in delivering a better user experience for the visitors.
Analytics
Analytical cookies are used to understand how visitors interact with the website. These cookies help provide information on metrics the number of visitors, bounce rate, traffic source, etc.
Advertisement
Advertisement cookies are used to provide visitors with relevant ads and marketing campaigns. These cookies track visitors across websites and collect information to provide customized ads.
Others
Other uncategorized cookies are those that are being analyzed and have not been classified into a category as yet.
SAVE & ACCEPT